The World Forum for Democracy returns with a sixth edition! – Call for submissions 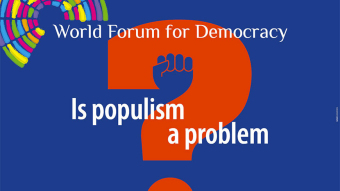 The 2017 World Forum for Democracy (WFD) will be held in Strasbourg on 8-10 November. This year, the role of political parties and the media in the context of rising populism will be at the centre of discussion, with themes such as “From democracy of parties to democracy of citizens?” and “Media - friend or foe of democracy?”. Debates will focus, among others, on how to counter populism and foster pluralism in online media rather than extremism and polarisation. Public and private organisations, as well as local and regional authorities worldwide are invited to express their interest in presenting their ideas by filling in the Submission of initiative in the Call for submissions document below and sending it to forum_democracy@coe.int by 30 April 2017.