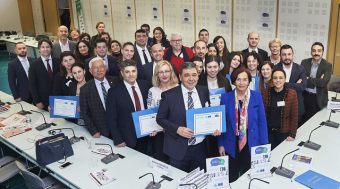 The 2017 co-ordination meeting of the European Local Democracy Week (ELDW), held in Strasbourg (France) on 30 January, brought together mayors and local councilors of the cities participating in the 2016 edition, as well as project co-ordinators, national ELDW co-ordinators and partner organisations. “The ELDW is a tool for making local democracy more accessible and understandable for all citizens, facilitating their direct implication in the decision-making process of matters that concern them. This is why local elected authorities and national associations of local and regional authorities are the main partners of the Week”, underlined Congress Secretary General Andreas Kiefer.

Participants presented the activities they organised in 2016, many of which were directly related to last year’s theme of “living together in culturally diverse societies”. They exchanged experience and good practices, and discussed the theme for 2017 which will celebrate the 10th anniversary, as well as possible developments for future editions. ELDW Spokesperson Gaye Doganoglu (Turkey, EPP/CCE) presented certificates to the representatives of the “12-Star” partners to reward them for their outstanding commitment to the ELDW.