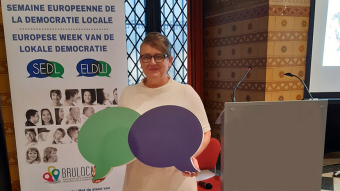 The Congress spokesperson on the European Local Democracy Week (ELDW), Bryony Rudkin (SOC/G/PD, United Kingdom), has released a message on the occasion of the week of 15 October during which flagship events by ELDW partners are being organised all over Europe.

“I congratulate the cities, regions and associations from Council of Europe member states across Europe who have managed, despite the difficult circumstances, to organise successful events this year. They continued thus to engage citizens at local level, even as the pandemic COVID-19 has affected our countries in an unprecedented way and had a deep impact on the lives of our communities,” stated Mrs. Rudkin, highlighting that the ELDW is taking place in conditions that the world has never seen before.

“The COVID crisis has brought to the forefront the crucial importance of trust and citizens’ confidence in public authorities and institutions of governance, especially in their communities, at the level closest to them,” she declared. She praised, in particular, the efforts made by the local authorities in the context of the health crisis, to communicate with citizens and engage them in public debate and decision making in response to the crisis.

Congress spokesperson pointed out that the crisis showed us yet again the value of the spave for public participation, the importance of the mission of the local and regional authorities, the effectiveness of digital tools for communicating with the citizens and how important it is to pay special attention to vulnerable groups.

She invited all partners to be a voice of the ELDW and organise flagship events during the week of 15 October and until the end of the year, using the ELDW online tools. “We stand ready to assist you and encourage you to reach out to the Congress to coordinate your action,” she concluded.

The European Local Democracy Week (ELDW) is a pan-European initiative co-ordinated by the Congress of Local and Regional Authorities of the Council of Europe since 2007. Throughout the year, municipalities and their national associations are invited to organise initiatives all over Europe aimed at promoting citizen participation, fostering dialogue between the community and public authorities, strengthening trust in elected representatives and institutions and providing a European dimension to local initiatives. A flagship event takes place during the week of 15 October, the date of the signature of the European Charter of Local Self-Government in 1985.