Annual Coordination Meeting of the ELDW 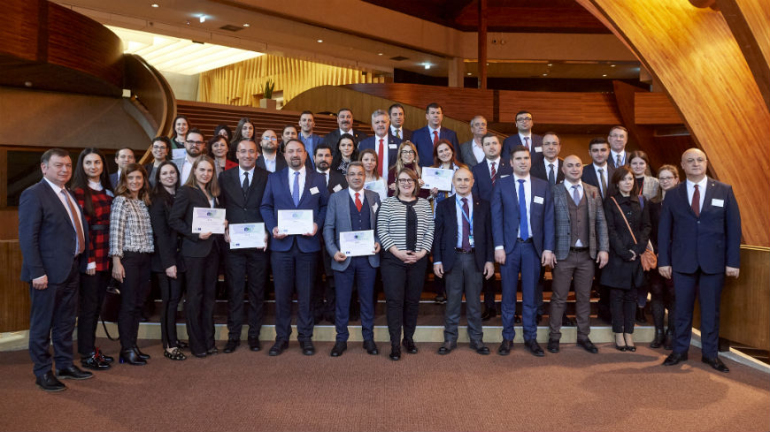 The annual coordination meeting of the European Local Democracy Week (ELDW) was held on 25 February 2020 in Strasbourg, France. Chaired by the thematic spokesperson on the ELDW, Bryony Rudkin (United Kingdom, SOC/G/PD), the meeting brought together around 45 local elected representatives and municipal officials representing 5 European countries (Armenia, Portugal, Romania, Turkey and Ukraine). The participants evaluated the 2019 edition, shared their best practices in participatory democracy and discussed new perspectives for the 2020 edition on the theme of “Local Democracy – Building Trust”. They also held initial exchanges in view of the future theme of the ELDW for 2021-2022.

On this occasion, the title of “Partner of the European Local Democracy Week 2019” was awarded to 19 municipalities of four countries that have committed themselves to go further in the promotion of local democracy. The awarded municipalities have implemented initiatives such as participatory budgets, youth councils, sign language courses to facilitate inclusion in the city, debates on citizen participation, training on sustainable entrepreneurship and theatre workshops. At the end of the ceremony, Bryony Rudkin presented the certificates to the partners in recognition of their commitment to the ELDW.

Participants also exchanged views on the new ELDW modalities, which include the organisation of activities throughout the year, a flagship event during the week of 15 October – date of the signing of the European Charter of Local Self-Government in 1985 – and the designation of a person of local influence as “Voice of the European Local Democracy Week” to bring the initiative closer to as many citizens as possible.