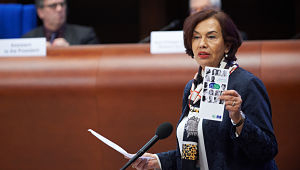 In the context of its 32nd Session, the Congress held an exchange of views on European Local Democracy Week (ELDW). The Week celebrates its 10th anniversary in 2017 and the theme is: “Citizen participation, consultation and commitment for a thriving local democracy” – Since it was first launched in 2007, the ELDW has helped to bring citizens and local elected representatives closer. “The ELDW has become a truly pan-European event that presents an opportunity to promote participatory democracy at the closest level to citizens”, stated Gaye Doganoglu (Turkey, EPP/CCE), Vice-President of the Congress and ELDW Spokesperson. She praised the ELDW partner cities’ commitment and in particular the cities of Katowice (Poland) and Stockton-on-Tees (United Kingdom,) which were present at the session to share their experience. Katarzyna Borkowska, Director of the Administration Department of the City of Katowice, ELDW partner since 2009, said that the citizens of Katowice took a keen interest in the Week and a growing number of people took part from year to year.