Andreas Kiefer: "We should not take for granted what Europe offers us” 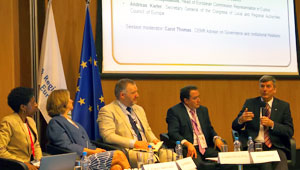 Speaking at the 2016 Congress of the Council of European Municipalities and Regions, on 21 April in Nicosia, Andreas Kiefer, Secretary General of the Congress, highlighted the importance of showing citizens the positive aspects of the work of European and international institutions. "We should not take for granted what Europe offers us in terms of human rights, democracy and the rule of law - Europe meaning the Council of Europe and the European Union.

Local and regional elected representatives have the opportunity, but also the responsibility, to promote the work they are doing at European level in the Congress and in the Committee of the Regions for the benefit of their local communities, and to explain their citizens the relevance of crucial international instruments, such as the European Charter of Local Self-Government, in their every day lives”. He pointed out that a practical tool offered by the Congress of Local and Regional Authorities in this respect is the European Local Democracy Week, a pan-European initiative designed for local elected representatives to meet and engage with citizens on issues of public interest and inform them about the work of public authorities at all levels.

Photo: Andreas Kiefer (right) during the session “Bringing Europe closer to you!”