60th anniversary of the Europe Prize - debate on multiculturalsim 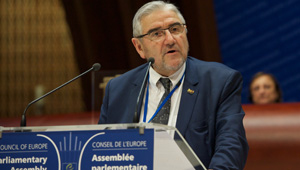 At the 60th-anniversary Europe Prize ceremony on 22 June 2015, Jean-Claude Frécon, President of the Congress, congratulated the two prize-winning cities for 2015, Dresden (Germany) and Vara (Sweden), for their commitment to promote Europe. He pointed out that the prize was the “fruit of a highly innovative initiative on the part of the Parliamentary Assembly aimed at supporting and promoting European ideals and also implementing them, on the scale of municipalities”. Jean-Claude Frécon stressed that there was a natural link between the Europe Prize and European Local Democracy Week (ELDW) run by the Congress, a link that was particularly strong this year, as the theme of the debate organised with the Europe Prize winners was also the one selected by the Congress for ELDW 2015: “Living together in multicultural societies: respect, dialogue, interaction”.