ELDW partner Kairouan launches co-operation with the city of Strasbourg 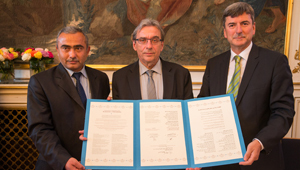 “The Congress welcomes the signing on 23 April 2015 of a partnership agreement between the cities of Strasbourg (France) and Kairouan (Tunisia) under the patronage of Congress,” said Andreas Kiefer, Congress Secretary General on behalf of President Jean-Claude Frécon. “The Congress is engaged in fruitful cooperation with the city of Kairouan, which in 2014 organised the Arab week of local democracy, for the third time. We hope that the future status of partner for local democracy adopted by the Congress last October and intended for local elected representatives from the Council of Europe’s neighboring countries will allow us to further expand this cooperation, “he added.